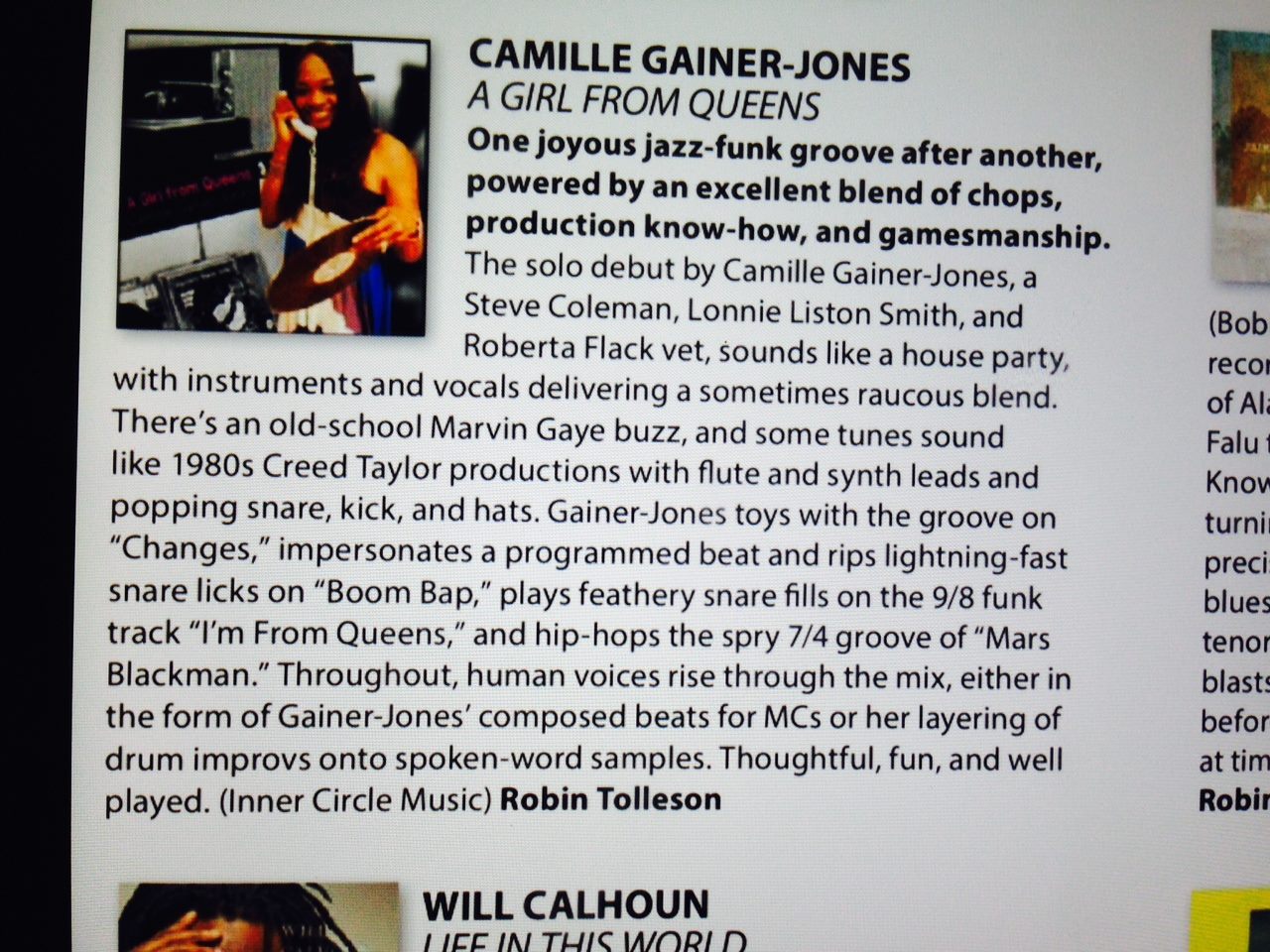 glossmagazineonline.com/Articles/Entertainment/Camille-Gainer-Jones-Enjoying-the-Journey.html
Deeply rooted and influenced by her East Coast background, percussionist Camille Gainer Jones marches to the beat of her own drum, literally. Surrounded by the influence of artists James Brown, Count Basie, Marcus Miller and others, the drummer’s eclectic sound fuses Soul, Reggae, R&B, Hip Hop, Jazz and Rock. The student of the legendary Michael Carvin of Motown uses the influences from her past as part of her inspiration to create her unique sound. 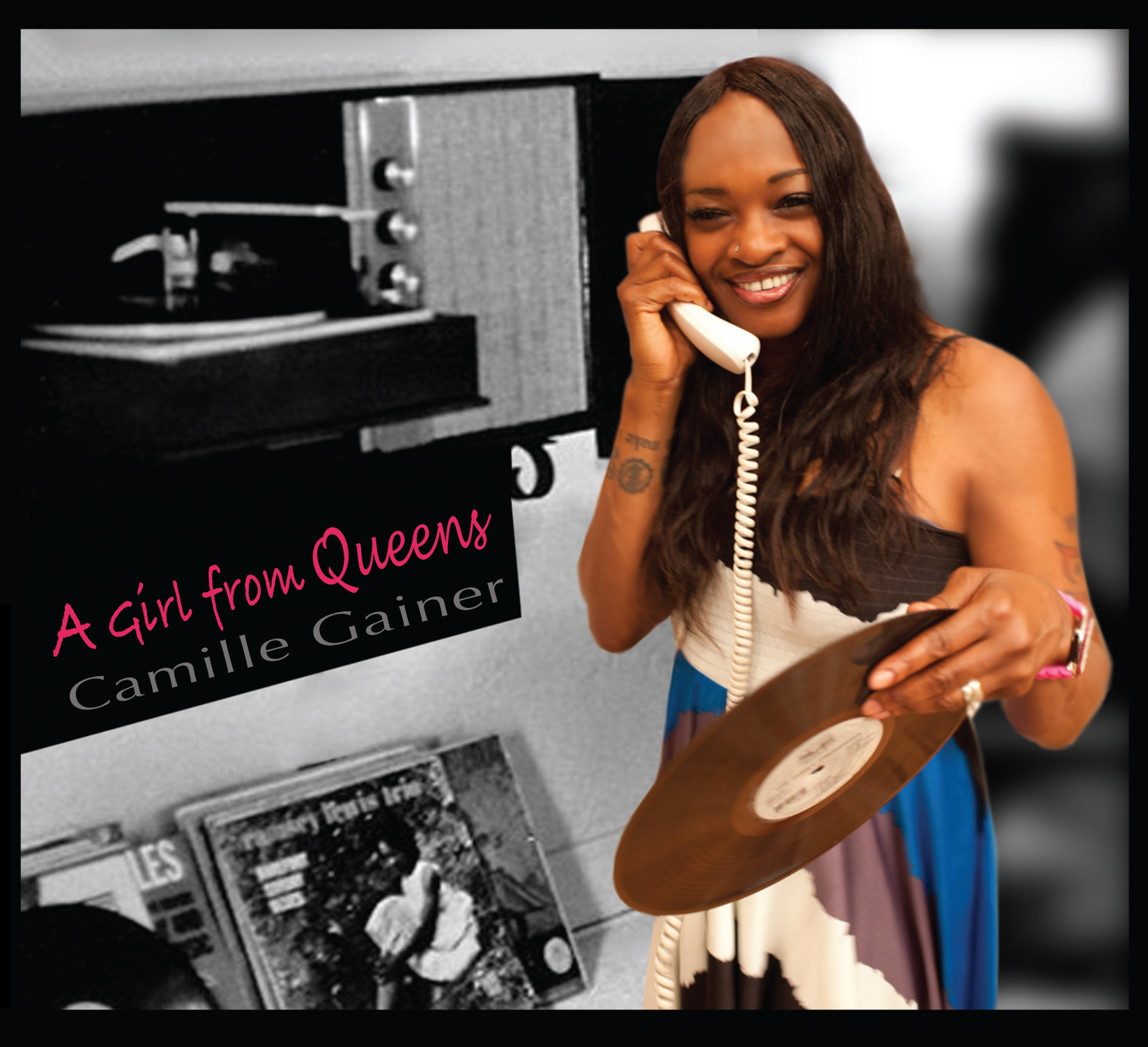 “These were people whose records I had and recordings I owned, but to have them live in the same neighborhood and to meet them was incredible,” she says. “The inspiration for my CD was everything I listened to growing up, the music I listen to now and my development as a musician and an artist. Wanting to have your own project is inspiration too because I don’t think you can remain a side person forever. That’s my inspiration.”

The versatile artist served in the U.S. Army for four years and when she’s not performing, she’s mentoring others as she teaches hip hop and gospel classes at the Drummers Collective in New York City, along with other private lessons at her private studio. The composer also works with entertainer Wayne Brady.

Camille confesses she was the only musician in her family. The seed of music was nurtured during her childhood as she grew up with an exposure to the arts, music specifically. Between hearing all genres of music in her home and attending musicals, the artist couldn’t deny her purpose. Camille says a birthday gift in her youth changed her life and the scope of her musical direction.

“I just had the feeling I could do it,” she recounts, about playing the drums. “I kept bugging my parents about it. Before that, I played other instruments like the piano, guitar, the violin and things like that. My father woke me up at like 2:00 a.m. and I thought I was in trouble at first. He said, “Look at what I got you!” I screamed and that was it. I probably played until 6:00 a.m. that morning.”

As the young artist spent hours rehearsing relentlessly and perfecting her craft, the New York native says she spent time in her neighborhood with people who knew how to play. With her band, they landed gigs at local parties and other gatherings where the young musician gained more experience and exposure in the music scene.

As she pays homage to drummers Sheila E. and Terri Lyne Carrington, Camille says she recognized some of the challenges female bandleaders face, although that glass ceiling was cracked by others before she stepped on the scene.

Music influences lives and Camille’s genre-free music speaks a universal language, which is what music is ultimately about, she says.

“Categorizing music is basically a way for people to feel safe and to market things,” she adds. “But, it’s really an organic thing and when I sit down to write, I go with what comes out and that’s what came out. If I’m doing music for the spirituality of playing music, I’m going to let it flow, let it rip and let whatever comes out.”